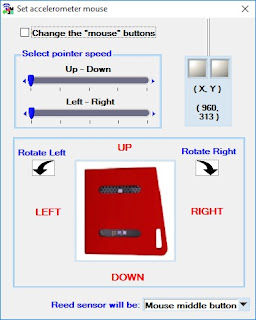 So, you can:
Mainly, because the SensorTag interferes with the mouse (it was designed to do that), to have only a mouse control just place the SensorTag in a horizontal position or close the accelerometer mouse application.
To illustrate how the accelerometer mouse works, in the following, I will present a movie in which slither.io's mouse control has been completely replaced by a SensorTag.


Attention: for CC2650STK the keys must be pressed less than 3-6 seconds! If you press the buttons longer, always you will get the following effects: (a) for the Power button more than 3 seconds: disconnect device and (b) both buttons more than 6 seconds: restore factory settings, i.e. apply the flash image that was programmed at production.
In slither.io game in order to have a speed bust, the left mouse button must be hold down. This action will cause only for the CC2650STK to disconnect the device. From this reason, in the above movie, I exchanged the functions of the SensorTag buttons. As a result, the power button was associated with right mouse button.

The blessTags application can be downloaded from the Windows Store Apps: https://www.microsoft.com/store/apps/9p054xsjjr1n.